Rachael first heard about the Czech Republic when First Saintfield sent a short-term mission team there in 2007 to lead an evangelistic English camp. Rachael returned to Czech as part of those teams for another three years and led an intern team in Czech for three months in 2012.

It was through those trips that Rachael felt God calling her to be a full time missionary in central and eastern Europe. And so, after twenty-four years of calling Saintfield home, Rachael was sent from First Saintfield to serve as a missionary with Josiah Venture in the Czech Republic.

Rachael is also active in her local church, discipling young women and prays a lot that God would help her as she studies the Czech language.

Josiah Venture serves in fourteen central and eastern European countries where less than 1% of the population are evangelical Christians. Each summer Josiah Venture do over one hundred evangelistic summer camps where young people can hear and respond to the Gospel. Rachael serves these camps year-round as she supports and equips the full time missionaries leading and organising them in each country.  Rachael writes a regular blog called Raising Ebenezers 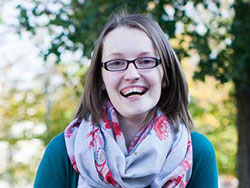 Rachael sends out monthly prayer requests.  If you would like to receive these by e-mail, please sign up using the form below.

You have Successfully Subscribed!

You have Successfully Subscribed!